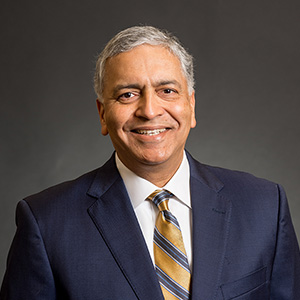 Dr. Ajay Vinzé began his tenure as Dean for the School of Business at George Mason on July 1st, 2022.

Dr. Vinzé comes to Mason from the University of Missouri, where he was Dean of the Trulaske College of Business from January 2017. Prior to his work at Mizzou, he was the Earl and Gladys Davis Distinguished Professor of Business in the Department of Information Systems at the W.P. Carey School of Business at Arizona State University. In addition to a stellar research record, his 18-year career at Arizona State includes assignments as Associate Dean for International Programs, Associate Vice Provost for Graduate Education, Director of the Executive MBA Program and the Management Information Systems Doctoral Program, as well as the Founding Director of the Technology Research Center. Before joining the faculty at Arizona State, he spent 10 years at Texas A & M University as both an Assistant and Associate Professor (with tenure).

During his time as dean at the Trulaske College of Business, he focused on situating the college among leading business schools nationally and internationally by significantly enhancing the research profile of the college and offering innovative programs that were market responsive and delivered both in traditional settings and in online or hybrid formats. Dr. Vinzé is credited with a number of forward-thinking innovations in the eLearning space and has innovated with experiential learning, micro-credentialing, and stackable certificates. Moreover, he raised over $30M in philanthropic giving during his time with the college.

Dr. Vinzé is a Fulbright Senior Specialist and a global citizen, having lived, worked or traveled through more than 70 countries over the past three decades.

In May 2016, based on a model developed by Dr. Vinzé, MasterCard Foundation awarded ASU $21.9 million. This inter-disciplinary six-year grant focuses on promoting tertiary education in sub-Saharan Africa.