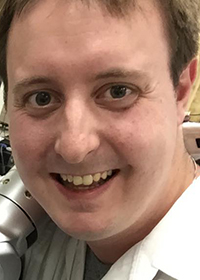 Building a fan base for the future’s all-robot baseball league.

Dan Lofaro’s PhD project made its public debut on an unlikely stage. His research in end-effector velocity control of non-planted robots (robotic throwing) enabled his HUBO humanoid robot subject to throw out the first pitch of the 2012 Major League Baseball season in front of 45,186 fans. Since 2014, Lofaro has been the director of Lofaro Labs Robotics and the Drones and Autonomous Systems Lab @George Mason University (DASL@GMU). His research interests include Robotics, Complex Control Systems, and Mobile Manipulating UAVs (MM-UAVs) with most recent ventures relating to Robot Design and Cloud Robotics. He continues to contribute to STEM outreach by coordinating, presenting, and participating in robotics and maker events throughout the globe. He believes that international collaboration is the key to success in both research and teaching, having spent extended periods of time in Europe and Asia. This has resulted in published work in noted journals and conferences in Turkey, South Korea, Croatia, Singapore, and Japan.