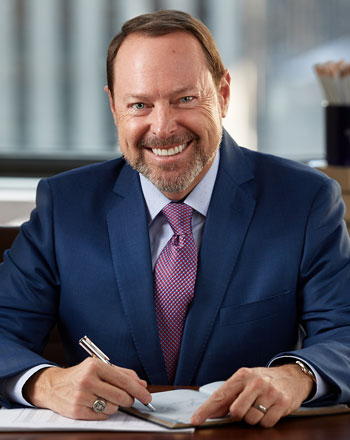 The Honorable Dr. John Hillen is a highly accomplished CEO in the government contracting space and a former high ranking U.S. government official. A decorated combat veteran and noted national security scholar, he has led four defense and intelligence technology firms in Northern Virginia, most recently as President and CEO of Sotera Defense Solutions - awarded the 2012 GovCon Contractor of the Year award in the large company category. Hillen took Sotera public in 2009, one of the few successful IPOs in the American economy that year. He was confirmed by the Senate as the US Assistant Secretary of State for Political-Military Affairs in 2005 and served in that role until 2007.

In the MBA program at George Mason, Hillen teaches courses in leadership, strategy, international business strategy, and the general government contracting industry. In 2017-18 he was voted the Outstanding Professor in the MBA program by the students. A Forbes contributor, he also writes a column on leadership and strategy issues in Washington Technology magazine. The author of several books, his latest work is What Happens Now? Reinvent Yourself As A Leader Before Your Business Outruns You (Select Books, 2018).

A recognized industry leader in the technology contacting space, Hillen served in 2012 and 2013 as the chairman of the Professional Services Council and currently sits on the boards of SOS International LLC, Software AG Government Solutions Inc., Cygnacom Solutions Inc., IAP Global Services LLC, Govini, Inc., and Atkins Nuclear Solutions. He previously served as President of CGI Federal. He has led several other companies in both the government contracting and financial services space.

Hillen received the Fed100 award twice - in 2011 and 2017 - has been the subject of cover stories in Smart CEO Magazine, Government Computer News, and Washington Technology. An experienced director of both public and private companies, he has served on the boards of over half a dozen federal contracting firms.