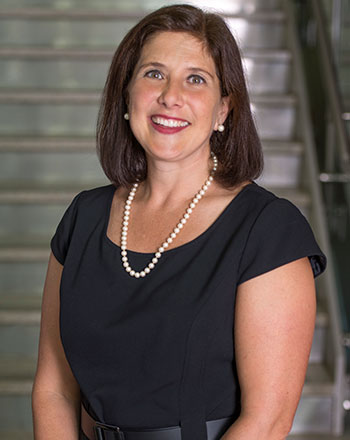 Dr. Lisa Gring-Pemble is the Business for a Better World Center's co-executive director. She is also an associate professor within the Business Foundations Area and co-founder of the Honey Bee Initiative. A Phi Beta Kappa graduate of St. Olaf College, she received her M.A. and Ph.D. in rhetoric from the University of Maryland.

Since joining George Mason University in 2000, she has pursued teaching and research around three main areas: 1) global impact and engagement, 2) argumentation, rhetorical criticism, and persuasion, and 3) political communication and public policy. She is author of Grim Fairy Tales: The Rhetorical Construction of American Welfare Policy and a co-editor of Readings on Political Communication. Her work has appeared in The Quarterly Journal of Speech, Political Communication, Rhetoric & Public Affairs, and Communication Quarterly. Current research focuses on the role of rhetoric and morality in capitalist markets, the role of language in legislation on equal pay and immigration, and the role of business in addressing sustainable development goals and creating positive impact.

As Co-Executive Director for the Business for a Better World Center, Gring-Pemble supports university-wide initiatives that engage students of all majors in social innovation, social enterprise, and entrepreneurship. She is deeply involved with impact and sustainability initiatives as co-founder of the Honey Bee Initiative, member of Mason’s team in the Deans and Directors Cohort of the Global Responsible Leadership Institute (GRLI), a representative of Mason in the Champions Cycle of the Principles of Responsible Management (PRME) Initiative of the UN Global Compact, and Mason’s liaison to Ashoka.